Jonne Kähkonen: “With my philosophy we can set goals for Milano Cortina 2026”

We are very proud to present the interview to the new face from the staff of the new Italian biathlon team, the finnish coach Jonne Kähkonen. Previously he was coach of the national teams of Finland and the United States, Kähkonen joined the Italian national team as shooting coach for the Milano Cortina 2026 women’s team. Tomorrow will be pubblished the italian version of the interview.

Kähkönen buongiorno. You’re the new face among the coaches of the Italian biathlon team. Can you tell us how the contact with the staff took place, your motivations and how he was welcomed in the new environment.

“Last season in World Cup I was chatting at the shooting range with Patrick Oberegger, norvegian coach and former italian coach. It was a general talk with him, just to talk about considering a little break after the season and what possibily appens after that. I think that I mention to Patrick that I wasn’t sure about my future, but then I had a few texts with Klaus Hollrigl, new italian technical and competitive director, and that’s how we start talking about the possibility of joining the Italian team.

For me, this is a great opportunity, I have always followed the Italian athletes since 2002 when I began at the World Cup as a coach. I know there’s history with great results and so far, as we talk about this position on the women’s team.It wasn’t just about Dorothea or Lisa, but there are a lot of young talent coming in, and they’ve already won medals at the junior world championships. So it’s always interesting for me to be part of that jump for those athletes from junior year to senior year and take them to the next level”.

The Italian women’s team that you’re going to handle is very young and talented. Most of them have already made their WC debut, but they’re far from the top level. Considering that Wierer probably will not be there, the mail goal is to increase step by step the level of the girls during this journey to Milano Cortina 2026?

“I had a philosophy and I believe in steady steps, in other words “to put in the work”: if you are talented enough and you commit to the hard work, you will get to the top and you get results. Sure, bad races or results can happen, but if everything goes well and you are committed to working every day that the results will happen. It sums up in an easy way regarding your simple steps at the end that you need to do, but it’s not easy when you need to do all the hard work.

I think that the biggest thing for young athletes to understand, which we already discuss in the first training camp, is to set the mail goals for the next four year and then small goals, for every year and even every month for their training. They have to understand that, where they are right now, the goal means be high towards Milano Cortina 2026 and also the hard steps along the way each year and within each year to get the right level”.

“When I look back at all the different athletes that I’ve managed, I think that the made similar steps. For example, with Kaisa Makarainen in the 2006/2007 season, she had a really good year with top ten results, but she took a couple of years in order to get the first podium, but getting closer and closer every year and with steady steps she was able to climb to the highest level.

For sure she was one with the potential and health, athlete able to get to the top level, but at the same time I handled a lot of US athletes, probably most of them were not so talented for physical side, but very committed to the hard work, conscious that if they were faster enough on the skies and with a good job on the shooting range they were able to get good results”.

Tell us more about your disappointment with the Finnish Federation, so you don’t want to extend your four-year training contract this spring. That was no easy task.

“I declined because I felt that my ideas and my philosophy in order to direct the Finnish Federation we’re not really supported and I couldn’t work well enough as I wanted. In a way, for sure, was not easy to decide this change, it’s a big step, but I did a good job and I’m sure that the Finnish team also can achieve good results because they reached the modern biathlon level. I feel like it’s like a relay, now I’m moving on to other coaches who have a responsibility to take these athletes to a higher level”.

One of the most interesting challenges will be to bring Lisa Vittozzi back to the level of the best athletes of the World Cup: which kind of thoughts did you have about her last year’s prone shooting and if you have already talk with her about it?

“For me it is a little bit funny how big everybody thinks that I am (he laughs). In the first camp, we had a conversation with Lisa and she was very open to talk about it. The most important thing for me is that she wants to hear what I have to say and see things in a different way. So we can change your way of being an athlete. She has a lot of experience and a very good reputation, and this can sometimes change your way of working.

I said to the girls that I am not a “magician”, but it will be hard work. I would be demanding a lot from them as an athlete, it does not matter how much the former coaches have been talking. It’s all about you and me, in order to take ownership and responsibility, open to analysis and not overly think.

She changed the way of working at the shooting range, but I think she is a fast skier, and Lisa can also ski faster, so we have to consider to improve Lisa as a whole athlete, not only shooting and ski sides. This is the main challenge, improve her total performance. This is the kind of philosophy we talked about at the first training camp and she’s really motivated to work with me. She’s a really good athlete with a lot of potential, so I hope to help her get better results”.

What will be your focus during the first summer meetings with the team?

“During the Tuscany camp we focused on the aerobic trainings for the body after the spring break, I was impressed about girls that made more than 100 km with the bike. From the shooting side, for me was good enough just to see how they shoot, in particular the techique and the execution, and we discuss about it. In the next training camp, we will train in a biathlon structure in order to start working on shooting.” 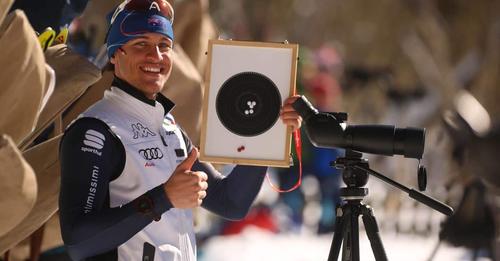